During the 1950’s and early 1960’s, The University of Tokyo conducted extensive research for Mitsui Mining and Smelting Co., Ltd. to study the effects of adding Perlite to turf grasses.

Among the findings of these studies were some very interesting discoveries about the affect Perlite can have to prevent draught damage. For instance;

Because of the increasing frequency of draught conditions throughout the World, there has been renewed interest in the role of fine Perlite as an amendment in landscaping and turf soils.

In particular, there has been renewed interest in looking at how Perlite is being using in both Japan and Israel, and in studying whether finer grades of Perlite should be used more and more to prevent draught damage.

To accomplish some of these goals, Dr. Grady Miller at the University of Florida was asked by the Perlite Institute to conduct a basic study on the use of Perlite as an amendment to sand, clay, and loam; and on how varying amounts of fine Perlite performs in these soils and how 100% Perlite performs. Curiously, what was found was that Perlite did not help germination per se.

But Perlite did have a number of very positive results:

The Perlite Institute and its members will now begin looking at the affect of fine Perlite on landscaping plants and scrubs. The studies will try to demonstrate whether Perlite can help prevent draught damage in plants and scrubs as much as it seems to work with grasses.

A picture of the effects of fine Perlite from the original Japanese study.

A picture of the effects of fine Perlite from the original Japanese study. 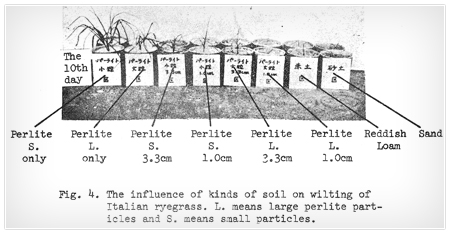 (The picture above was taken after only 10 days with no water. On the right, the ryegrass grown in just sand and reddish loam soils had already wilted. Various mixes with Perlite in the center did better, and grasses grown in 100% fine Perlite on the left side of the picture did best.)