Expanded Perlite granules can be bonded to form rigid shapes for a very wide range of applications. The most suitable binder for many purposes is a liquid sodium silicate similar to traditional “water glass.” The liquid sodium silicates are solutions of water soluble glasses manufactured from varied proportions of Na2C03 and SiO2, providing a wide range of chemical and physical properties.

Sodium silicates are widely used as high temperature adhesives and binders due to the following properties:

Silicate-bonded Perlite makes an insulation material which is completely non-flammable, the refractory nature of the bond being a major advantage.

Potassium silicate is sometimes preferred for applications where heat insulation and fire resistance are the main objectives. This material has a slightly higher softening point than its sodium counterpart.

Sodium silicate is widely used as a binder for molding sand in foundries. The technology for Perlite/sodium silicate composite manufacture is based largely on this foundry industry experience.

A wide range of formulations of Perlite, sodium silicate solution and setting agent can be used, together with additives to control setting of the mix. General guidelines are given as a starting point.

The choice of grade of sodium silicate solution depends on the application and setting process being used. Generally, a higher silicate to alkali ratio gives faster setting while lower ratios and higher solids contents give greater strength in the finished product. 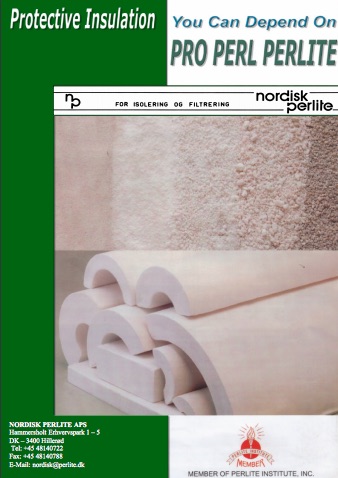